An article by John Wernham, DO

Andrew Taylor Still grew up in America in the second quarter of the 19th century. His father was a Methodist circuit rider, that is to say he preached on the move. He was also a doctor and a farmer. This meant that Andrew gained his schooling wherever the doctoring or farming chose to be, but there is no record of his training in Medicine and it must be assumed that he served an apprenticeship with his father. 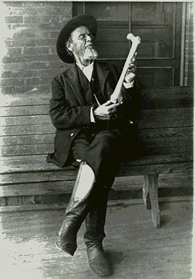 Still was a Frontiersman: armed with a gun and three dogs he shot deer, coons, foxes, opossums and skunks. Capturing eagles also featured in the dayís sport. Panthers appear in the story but our Founder was saved by one crack of the whip!

We next find Still serving as a major in the American Civil War where he describes the passage of two musket balls that were too close for comfort and very nearly deprived him of a future and our osteopathy.

In the spring of 1864, the war was practically over and Still returned to civil life and medicine only to be confronted by tragedy that he described as ëthe new enemyí called spinal meningitis and the death of his three children. It was at this time that he began to question the medicine of his time and to seek an alternative system of treatment, without drugs. How this was done and the nature of the directives that became operative in those dark days of bereavement, we shall never know. We do know that all great movements begin with one man in a time of despair and total loss. Perhaps that is sufficient explanation?

But there were breakers ahead. He was disowned and dishonoured by his family and colleagues and he became an itinerant healer, scarcely to be distinguished from the quackery that infested the fair grounds of one kind and another. In spite of this distinctly humble origin, the new healing was successful and the travelling salesman settled in the country town of Kirksville where the first school of osteopathy was established.

This provided another hurdle for the infant therapy to surmount and another thorny path called Recognition. This varied from state to state and the political picture offered the usual complex pattern that would have dismayed a less determined man than Andrew Taylor Still.

John Martin Littlejohn belonged to the last quarter of the 19th century, during which time he graduated from Scottish Universities in the arts and languages. A native of Glasgow he was ordained in the ministry of the Reformed Presbyterian Church of Scotland, taking a living in Northern Ireland. Unhappily, Littlejohn found the damp climate unsuited to his frail health and he was advised to seek a warmer and drier climate overseas.

Thus he set sail for America with only six months to live according to professional opinion. None-the-less, he began to teach soon after arrival, continuing for a period of two years and until his health broke down. Fortunately, the fame of Still attracted the patient to Kirksville, where he recovered to become a student of osteopathy, lecturer and co-founder.

These two men, Still and Littlejohn, combined to give us the theory and philosophy of osteopathy, yet they never worked as a team or were ever in agreement. Still, the discoverer, saw only a part of the truth in the discovery. Littlejohn, on the other hand, looked behind the physical skeleton to the invisible function that is immanent in the physiology. Littlejohn spent more than ten years in Chicago studying the fundamentals of life and movement in the living body and laid the foundations of our technique and practice: the output was enormous during that period and has since been called the hurricane years.

Returning to the United Kingdom in 1913, he established the British School of Osteopathy, where he taught assiduously until the outbreak of war in 1939. Following his death in 1947 his successors destroyed his teaching and memory, replacing the Trojan-like work of a lifetime with the institution of medical teaching that is totally incompatible with osteopathic thought and practice.

The Life and Times of John Martin Littlejohn